Teising is a municipality in Germany's largest state Bavaria. Teising is located in the administrative district Altötting and has a population of 1,870 people. All informationen about Teising at a glance:

Source of information on area and population: Statistisches Bundesamt, Wiesbaden. Month of publication: 4-2021

1 place found that are subordinated of the municipality Teising (sorted alphabetically):
Teising, Oberbayern

Distance to the federal capital: The capital of Germany Berlin is approximately 481 km (298.9 miles) away from Teising. Show route: Route

.: Find out more about Teising

.: Places in the regional area of Teising 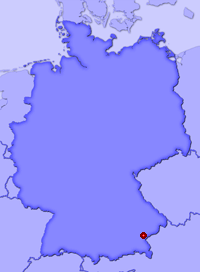